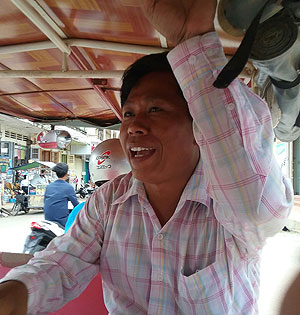 Bunrith (Racky) Thy is the founder of Children’s Action for Development (CAD).   The name Racky is actually a nickname given to him by one of his teachers who enjoyed listening to the music of a well known singer from the Philippines who was named Racky. He said that Bunrith was not easy for foreigners to remember so Racky took on his new name.
Racky grew up during the horrors of the Khmer Rouge era and experienced things that no young boy should have to.  He moved from his village to Battambang to study when he was 13 years old and lived at a pagoda with the monks.  It took Racky 40 years for to write the story of his life under the Khmer Rouge. To get a better understanding of the forces that drive this man on, read his full story here.
Racky graduated high school in 1996 and volunteered to work with a number of local Non Governmental Organisations (NGOs) so that he could understand how they functioned.  Eager for further development, Racky went on to study at Battambang University, completing a degree in Human Resource Management.
In 2000, he married and had two children.  To earn money, he became a tour guide and was featured in the Lonely Planet due to his extensive knowledge about the local culture and history of the province.  On one particularly day he was taking a tour group to see the countryside when a group of children attempted to communicate with the group in English. With prompting from Racky, they were speaking basic sentences in English in just a few minutes. One of the visitors asked him if he wanted to open an English school and the answer from Racky and the children was a resounding yes!.
Racky opened one school, called the Cambodia Education Centre, providing English classes. Then, in 2006, Racky renamed the project “Children’s Action for Development” and schools popped up in five different locations, teaching 321 children with 27 volunteer teachers and staff.  Classes were expanded to include English, Khmer Literacy, Mathematics, Sociology, computer, life skills and sport.
For many years Racky managed CAD as a volunteer and used his teaching jobs at the University to earn money. Then, in 2012, things started to change when CAD began a partnership with Future Sense Foundation  and Classroom of Hope.  These two international NGOs have enabled CAD to employ Racky and his team and significantly improve the quality of the supplementary classes.

To watch Racky tell his own story, watch this video...


For a very brief overview of CAD and Cambodia watch the following...
(Thanks to 'Steckog' for uploading this on youtube)

Children’s Action for Development (CAD) is supported by a team of incredible staff who dedicate enormous amounts of their own time to this positive initiative. Staff includes teachers, program managers social workers and financial administrators. Without these amazing people CAD would not be able to improve the lives of hundreds of children, their families and the broader community as a whole. Every day we are grateful for their ongoing commitment and assistance and no words can thank them enough!

Meet the Governing Board

No NGO could run without the oversight of a Governing Board. Their job is to monitor the organization and use their expertise to further build the capacity of the organization. They are all volunteers and we thank them.